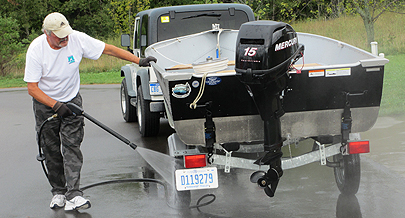 The boat wash and launch is located:

In the spring of 2013 CLWA installed a boat washing station at the public DNR Crystal Lake Boating Access Site, off Mollineaux Road and M-115 on the southwest shore of the lake. The CLWA received the right to lease State land and operate the station as part of an agreement with the DNR, reached in response to CLWA’s concerns about the launch site’s potential to introduce invasive species being carried by boats visiting from other waters.

The station is open May through October and there is no charge for boat washing. Hot water is provided, which eliminates unwanted aquatic hitchhikers most effectively. CLWA provides limited staffing of the boat wash from Memorial weekend through Labor Day weekend and on weekends in the fall, although it is easily do-it-yourself at all times. The process is quick and easy, taking no more than five minutes for most boats.

A new Michigan law went into effect in March 2019 that requires thorough cleaning of all watercraft (including non-motorized), emptying of all water from the craft, and also restricts disposal of fish and bait. For the full text of the law CLICK HERE.

In 2014 all the Townships surrounding Crystal Lake approved ordinances ($500 fine) requiring boats to be washed prior to being launched into the lake if they have been operated in another watershed in the last 10 days.

In addition to the main DNR boat launch at Mollineaux Road, where the CLWA’s washing facility is readily available, there are several other secondary boat launch sites around Crystal Lake, for example at the Beulah Public Beach, the Crystal Lake Yacht Club, and public road ends. Boaters should be aware that the boat washing ordinances apply wherever your boat is launched – if it has navigated other waters within 10 days, it must be washed.