Invasive species – both animal and plant – pose a continual threat to the ecology of northwestern Michigan. Once these non-native entities arrive, they can reproduce and spread rapidly in areas where they have no natural predators, driving out beneficial native species and harming the environment, the economy, and even human health. After the intrusives have become established, eradication is extremely difficult, if not impossible.

One of the CLWA’s highest priorities is preventing the spread of aquatic invasives into the Crystal Lake watershed environment. Since these nuisances are commonly introduced into a new lake by hitchhiking on watercraft that have picked them up elsewhere in infested waters, the CLWA has promoted boat washing on Crystal Lake.

CLWA has also focused on regular monitoring of the watershed to identify potential threats at an early stage, followed by rapid action to control or eliminate the intrusive plant or animal before it becomes widespread. In the summer of 2008, as part of the Cooperative Lakes Monitoring Program (CLMP) the CLWA sampled, identified, and mapped aquatic plant species for comparison with previous studies. It launched a new comprehensive aquatic plant identification and mapping survey in the summer of 2016, again under the auspices of the CLMP. This survey was completed in the summer of 2018, with the assistance of aerial drone observation.

Eurasian watermilfoil was the only invasive aquatic nuisance plant detected during the survey. It is well established and extensive at the east end of the lake, in the area of the Beulah public boat launch. Smaller patches occur at the eastern parts of the north and south shores, again in the vicinity of public boat launches (for example, at the Mollineaux Road DNR launch and the Lobb road end). The CLWA is now developing a treatment and control plan to prevent this problem from becoming more severe. For the latest news about treatment plans, CLICK HERE.

Members of the public can help control the introduction and spread of invasive species in Crystal – by washing their boats and by watching for and reporting the appearance of any unfamiliar plants or animals in the water or on the shoreland. Below is a list of species that currently pose a particular threat to Crystal Lake, along with links to more information and how you can report any observations.

Sightings may also be reported to: info@crystallakewatershed.org

The following invasive plants and fish already exist in the Crystal Lake Watershed. Occurrences should be reported so that prompt control measures can be taken: 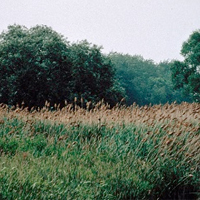 One of northwest Michigan’s “Top 20” invasives. A warm-season perennial grass with a rigid hollow stem and leaves that are flat, smooth, and green to grayish-green. The flowers grow as dense branched clusters on the end of each stem that are open and feathery at maturity. The plant ranges in height from 6-13 feet. Its dense spread quickly takes over wetlands. 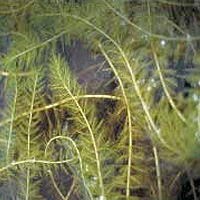 An aquatic plant with stems that are whitish-pink to reddish-brown, leaves that are greyish-green with finely divided pairs of leaflets that are 1/2 – 2 inches long that give the plant a feathery appearance. The leaves are arranged in whorls of 3-6. Yellow or reddish flowers with 4 parts on a projected spike sitting 2-4 inches above the water.

Freshwater fish up to 30.5 cm long that perch on rocks in shallow water and open sandy areas.They have voracious appetites and an aggressive nature that dominates native species. Frequently introduced by ballast water.

The following invasive plants, mollusks, and crustaceans have not yet been recognized in the Crystal Lake Watershed, but are found in nearby Michigan lakes and are in danger of being introduced here. If sighted, they should be promptly reported. 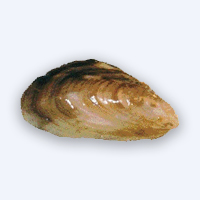 A close relative of the Zebra mussel which already infests Crystal Lake. Like its cousin, it consumes native phytoplankton and clogs lakeshore recreational equipment. More rounded shell and less prominent dark rings than the Quagga. Can grow to 2 inches in length. 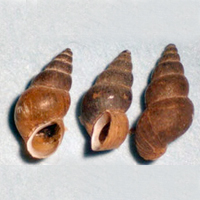 Small dark snails that reproduce rapidly to high densities in many habitats. Their small size makes them difficult to detect when attached to fishing gear or watercraft. 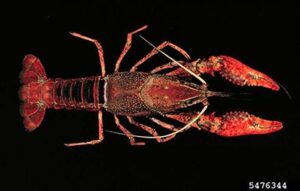 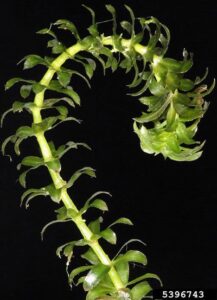 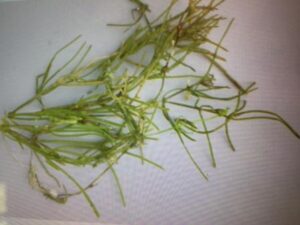 Submerged whorls of 4-6 leaves with blunt tips; can reach up to 33 inches. Forms dense mats that significantly reduce the diversity of other aquatic plants. Mats impede movement of fish, water flow, and recreational activities. For more info, click here 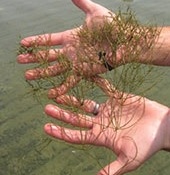