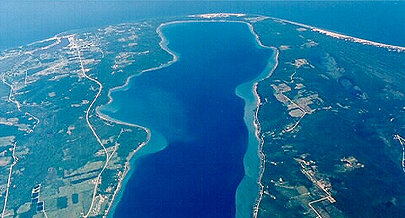 Crystal Lake spread evenly over all of Benzie County, would cover the surface to a depth of 44 inches – just about head high for a average 5 year old!

A faucet flowing at 10gal/min for 51 years would add 1 inch to Crystal Lake!

The Atlantic Smelt was planted in Crystal Lake in 1912 and spread through the western Great Lakes!

“Some consider blue ‘to be the color of pure water, whether liquid or solid.’ But, looking directly down into our waters from a boat, they are seen to be of very different colors. Walden (Crystal) is blue at one time and green at another, even from the same point of view. Lying between the earth and the heavens it partakes of the color of both.”

The Lake Michigan Coastline of Northwest Lower Michigan has always captivated the imagination of all who “paddled by it” or “walked about it”. Beginning with explorations by Frs. Marquette and Charlevoix; land surveys by the Burt brothers, Alvin and Austin; geological surveys by Douglass Houghton, Henry Schoolcraft, and Alexander Winchell; the “Comedy” / “Tragedy” of Crystal Lake promoted by Archibald Jones; environmental studies by Henry Chandler Cowles, William James Beal, Warren Gookin Waterman, Irving D. Scott, Frank Taylor Leverett, James Lewis Calver; and Oren B. Evans, and the prose of William L. Case, Bruce Catton, and Earnest Hemingway, it has continued to the present day. Thoreau traveled on Lake Michigan near Crystal Lake, and “botani zed” at the Carp River (Leland), viewing the Manitou, Fox, and Beaver Islands.

Crystal Lake is unique among large inland lakes. The “Tragedy” / “Comedy” of Crystal Lake was an epochal event that defined the future development of Benzie Co.1873, the Benzie Co.River Improvement Co. Archibald Jones, President) attempted to create two navigable slack – water canals connecting Crystal Lake with Platte Lake (N) and Betsie Lake (S) to convey settlers to the interior and products to market. The “Tragedy” was that t he capricious whitecaps of the Lake washed out a temporary dam and the canals never materialized. Crystal Lake lost ~ 2 5 % of its area and volume and its level was lowered by 20 feet. The “Comedy” was the creation of a 21 – mile sandy beach and prime recreational land around the Lake that now contains 1,100 cottages, resorts, and the county seat. The lake level is now controlled by dam at Outlet Creek that flows into the Betsie River, and onward into Betsie Bay and Lake Michigan. 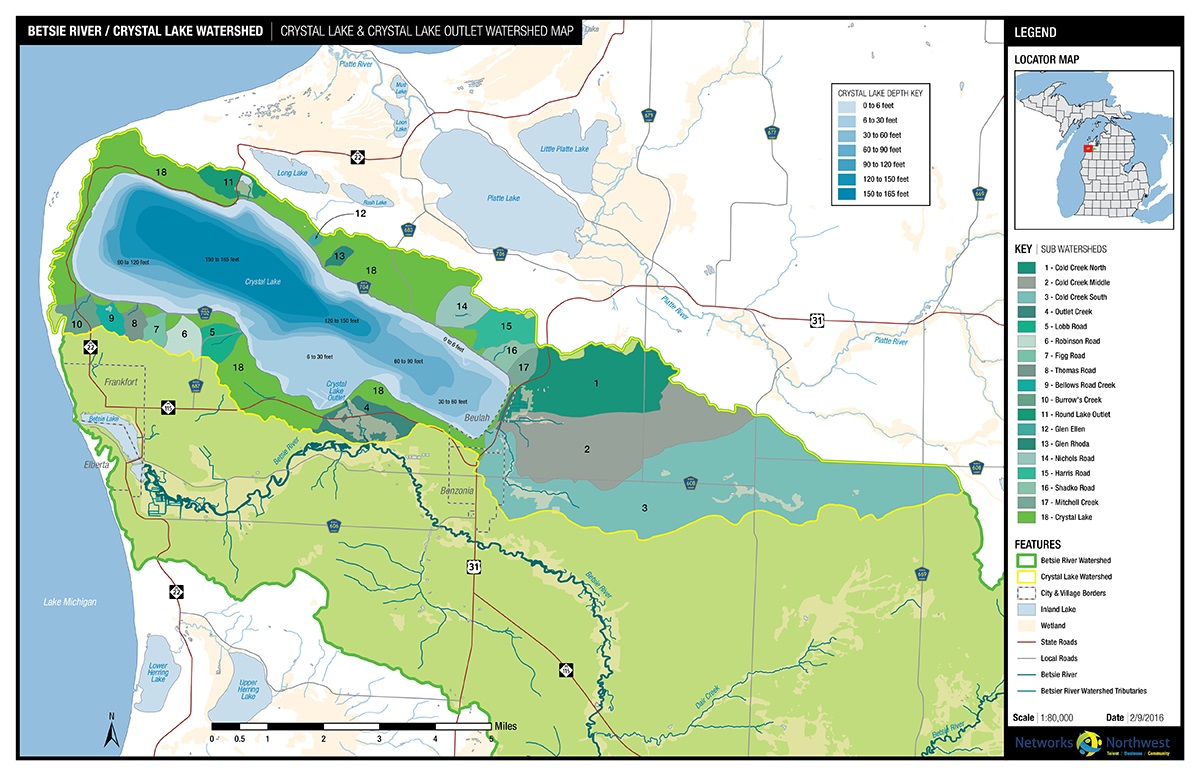