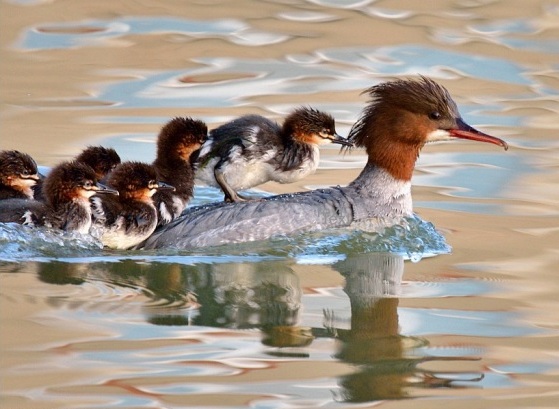 Swimmer’s itch is a skin condition caused when swimming larvae of several species of parasitic flatworms encounter human beings rather than their usual avian host, penetrate the skin and trigger an allergic reaction in many people. Scientifically known as schistosome cercarial dermatitis, it has been recognized in Michigan inland lakes since at least the 1920s, although only in recent years has it become a significant problem for recreation.

In response to increasing complaints on Crystal Lake, the CLWA formed a Swimmer’s Itch committee in the summer of 2006. In 2009 concerned stakeholders formed the Crystal Lake Swimmer’s Itch Partnership, which now constitutes one of the standing committees of the CLWA. In 2015, CLWA helped form a coalition called Michigan Swimmer’s Itch Partnership (MISIP), which grew to 31 northern Michigan lake associations. By joining forces the group has greatly expanded the expertise and resources now being directed at solving this complex problem, which is so detrimental to enjoyment of Crystal Lake’s waters.

During the summer of 2016 the CLWA contracted with SICON LLC to carry out a full-lake assessment of the snail infection rate on Crystal Lake, which will serve as a base-line metric for measuring future progress in decreasing the incidence of the parasite. TO READ THEIR REPORT CLICK HERE.

In 2017 and 2018, with the assistance of appropriations from the State of Michigan awarded to the MISIP, the CLWA hired Swimmer’s Itch Solutions LLC to trap merganser broods and relocate them to other water bodies where swimmer’s itch is not present. A full report on the 2017 work is now available HERE and the 2018 final report is HERE. The summer of 2018 already showed significant decline in the incidence of swimmer’s itch reported on Crystal Lake. This promising outcome follows the experience of Higgins Lake, which began a similar program in 2015 and has seen excellent results.

A limited study of the snail infection rate in summer 2018 also reflected a substantial decline in comparison to the 2016 assessment.

In 2019 CLWA’s own team, which had been trained by Swimmer’s Itch Solutions, took over the trapping and relocation of mergansers, and they are continuing in 2020. TO SEE A VIDEO OF THEIR METHODS, CLICK HERE The incidence of swimmer’s itch continued to show significant decline during the 2019 season. In 2019 Swimmer’s Itch Solutions, on behalf of CLWA, began a program to analyze water samples for swimmer’s itch parasite DNA using the qPCR method. This too showed a decline in the presence of the parasite and the presence of a single species. CLICK HERE FOR REPORT

Additional components of the current SIS program include bird-banding to study merganser migration patterns and experimentation with methods of locating merganser nests (usually in hollow trees).

Over the years the CLWA has carried out several trial programs to combat swimmer’s itch:

In addition, the CLWA actively supports scientific research to increase knowledge of the biology of the parasitic cycle and the causes of swimmer’s itch, in order to find better methods of combating it. Daily records maintained at the Congregational Assembly beach have provided invaluable raw data. SEE THE DATA HERE: Swimmer’s Itch data CSA summary 2013-2021

CLWA has collaborated with biologists from Oakland University who have used these data to examine the behavior of swimmer’s itch parasites and how that affects human reaction. Their studies show that swimmers are most at risk in the morning and when the wind is directly on shore. A summary of this work and their conclusions is HERE. The full scientific report, published in the Cambridge University Press journal Parasitology (2020), can be found HERE.